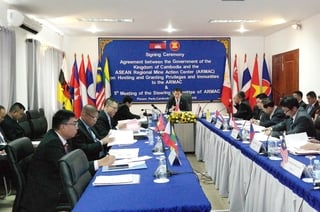 The 5th Meeting of the Steering Committee of the ASEAN Regional Mine Action Center (ARMAC) was held on 27 February 2018 in Phnom Penh, Cambodia. The meeting was chaired by H.E. Mr. Michael Tan, Ambassador Extraordinary and Plenipotentiary of the Republic of Singapore to the Kingdom of Cambodia. The meeting was also attended by members of the ARMAC Steering Committee comprised of delegates from all ASEAN Member States, and the Executive Director of ARMAC.

The meeting was opened by H.E. Mr. Michael Tan, where he highlighted the key focus areas of Singapore’s Chairmanship of ASEAN in developing the foundation and administrative system of ARMAC, and how it would translate into priorities and outcomes for ARMAC. The meeting also discussed the continuing progress of ARMAC’s operationalization, including a review of the Center’s current workplan, budget and upcoming activities.