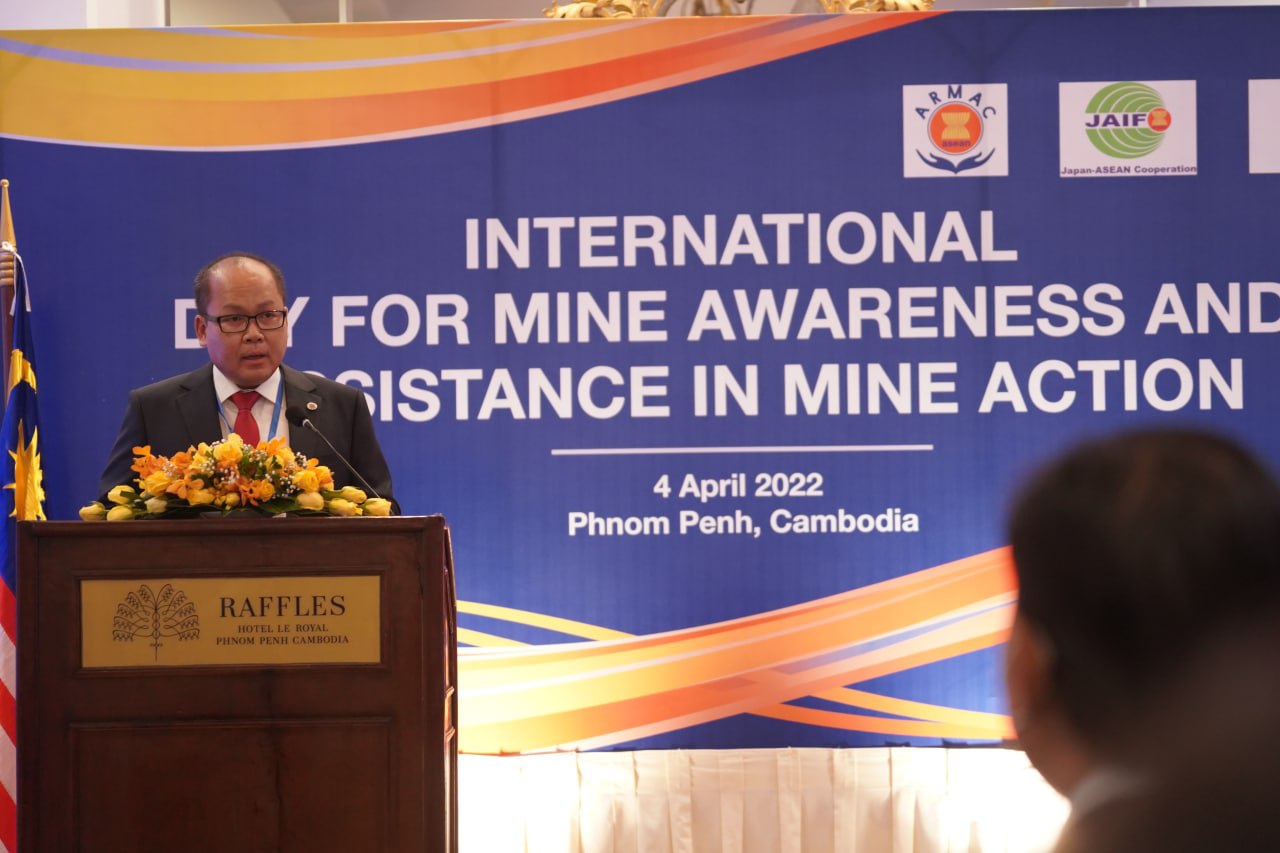 The ASEAN Regional Mine Action Centre (ARMAC), with support from the Government of Japan, hosted an event to commemorate International Day for Mine Awareness and Assistance in Mine Action on 4 April 2022 in Phnom Penh.  The event commenced with a knowledge sharing session, with international experts discussing innovations in the field of Explosive Ordnance Risk Education or EORE. World Education, Mine Mark Foundation and MAG International presented innovative projects in the field.

At the conclusion of workshop, distinguished guests of the diplomatic community assembled to mark the International Day for Mine Awareness and Assistance in Mine Action.  In her keynote address, Her Excellency Mrs. Eat Sophea, Secretary of State, Ministry of Foreign Affairs and International Cooperation of the Kingdom of Cambodia underscored that, “the campaign to enhance mine awareness remain a crucial tool not only to educate people of their danger and long-term impacts to affected communities, but also to maintain mine-free and victim assistance effort high on the national and international agendas”.

His Excellency Mr. Chiba Akira, Ambassador of Japan to the ASEAN also addressed the event, highlighting the nearly 50 years of cooperation between Japan and ASEAN and the support that Japan has afforded both to ARMAC and broader mine action efforts within Cambodia and the region.  He emphasized the importance of regional approaches and international organizations, given the current turbulence in international relations.  He said: The political and security dynamics around the world have been rapidly changing, and ASEAN has become more important than ever in coping with challenges we face.

Diplomatic representatives from ASEAN member states also addressed the event, with His Excellency Mr. U Thit Linn Ohn, Ambassador of the Republic of the Union of Myanmar, and His Excellency Mr. Panyarak Poolthup, Ambassador Extraordinary and Plenipotentiary of the Kingdom of Thailand, both highlighting achievements and progress made in the mine action field that have recently been accomplished within their respective states. Cambodian Mine Action and Victim Assistance Authority Secretary General Mr. Prum Sophakmonkol spoke on behalf of Cambodia The International Day for Mine Awareness and Assistance in Mine Action is marked annually on 4 April across the world.  In 2005, the United Nations General Assembly called on all states to commemorate this date and continue their efforts to support the development of national mine-action capacities in countries affected by mines and explosive remnants of war. Explosive ordnance (EO) unfortunately still constitutes a serious threat to the safety, health and lives of the civilian population, and an impediment to social and economic development in five of the ten ASEAN Member States.