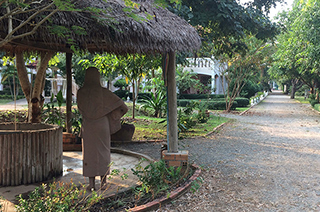 Ms. Dwi Prameswari, ARMAC’s Technical Officer of Mine Action requested a meeting with the Country Director of JRS in Cambodia to exchange information on victim assistance and mine action. The interaction and collaboration with various stakeholders will benefit the center to further implement its mandate and functions. The success of mine action in the region involves many actors, including the NGOs, who give inputs and suggestions, and implement their own impactful programmes.

There are 5 (five) JRS Offices in the Southeast Asia region which are involved with mine/ERW action and victim assistance. JRS Cambodia was established in 1990, and initially focused on refugees, victims of landmines, poverty and vocational training for people with disabilities. Sr Denise Coghlan was on the Steering Committee of the International Campaign to Ban Landmines (ICBL) when it received the Nobel Peace Prize in 1997.

In victim assistance, besides ensuring the basic components of medical response, rehabilitation, psychosocial support and economic development given to the survivors, it is also important to encourage survivors and people with disabilities to get involved in programmes which are relevant to them. JRS published the book “I am Happy I am Alive!”, which outlines a Village-Focused Approach led by survivors with inputs from leaders and communities to make the National Plan understandable at the local level.