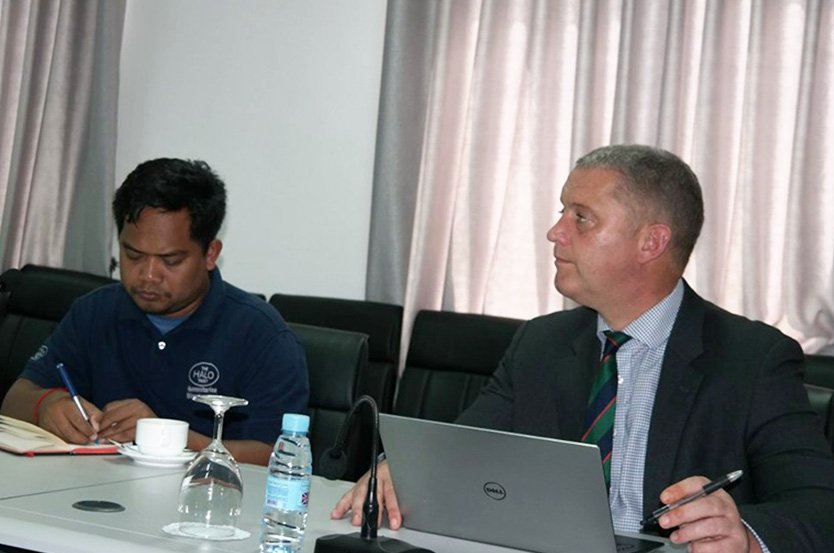 ARMAC hosted a meeting between HaloTrust and the ARMAC permanent secretariat on 15 January 2018. The meeting was a courtesy call to ARMAC and HaloTrust congratulated the Executive Director of ARMAC for his involvement in ARMAC’s operationalisation. The meeting started with a brief introduction from the participants and proceeded with the presentation on ARMAC’s establishment, structure and implementation progress. Both parties hope for further development of strategy, action plans and programmes in the future.

Mr. Matthew said HaloTrust has been established in Cambodia since 1991 – working with UNCHR to conduct surveys. Currently there are 1000 local staff working in specific areas in Cambodia and 3 (three) expats. Among this 1000 staff, 800 staff focus on mine clearance and 200 others work on the disposal of ordnance/stockpiles, surveys, and MRE. In Cambodia, the selection of areas to be cleared is decided by the National Authority, CMAA. The funding received by HaloTrust comes from various donors, such as the USA, UK, Germany and Ireland. HaloTrust looks forward to having more consolidated funding mechanisms for more efficient mine action programmes conducted in the country.

In the ASEAN region, HaloTrust currently has a presence in Lao PDR and Myanmar also. Mr. Matthew expressed interest for collaboration with ARMAC, specifically regarding cross-border demining coordination.