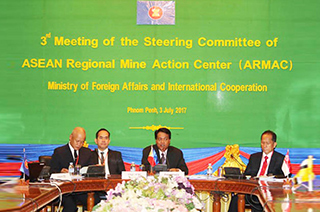 The discussion of the Meeting focused on the operationalisation of the Center, including the revised Annual Operational Budget 2017, its Work Plan (2017-2018) and the selection of Executive Director. As a host country, the Royal Government of Cambodia has provided full funding support for the first two years of ARMAC’s operations (2017-2018).

The Establishment of ARMAC in Cambodia was the initiative of Samdech Akka Moha Sena Padei Techo Hun Sen, Prime Minister of the Kingdom of Cambodia, during Cambodia’s Chairmanship of ASEAN in 2012. The Official Inaugural Ceremony of ARMAC Headquarters in Phnom Penh was launched on 25 May 2016 and presided over by H.E. PRAK Sokhonn, Senior Minister and Minister of Foreign Affairs and International Cooperation, and attended by representatives from ASEAN Member States, and relevant organizations.

Since the Interim Executive Director assumed office on 20 April 2017, ARMAC is currently serving as a center of excellence to assist interested ASEAN Member States in research, knowledge sharing and raising awareness of the effects of explosive remnants of war (ERW) and encourage efforts to address them.