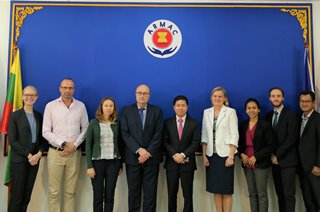 Today, ARMAC had the pleasure to host a meeting with a delegation from Norway led by H.E. Mr. Hans Brattskar, Ambassador, Permanent Representative of Norway to the United Nations and the 2019 President of the Anti-Personnel Mine Ban Convention. H.E. Mr. Brattskar was accompanied by H.E. Ms. Kjersti Rødsmoen, Ambassador of Norway to Thailand and Ambassador-designate to Cambodia, as well as Mr. Aksel Steen-Nilsen, Country Director of Thailand and Cambodia Norwegian People’s Aid – Humanitarian Disarmament.

The meeting discussed Norway’s extensive contributions to the mine action sector and highlighted its continuing commitment to the ASEAN region. Also discussed was how ARMAC could pave the way for closer cooperation between ASEAN Member States, international organisations and local stakeholders.

ARMAC greatly appreciates the efforts of H.E. Mr. Hans Brattskar in focusing global attention on mine action and wishes him a successful presidency.