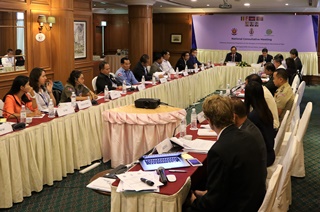 Supported by the Government of Japan, through the Japan-ASEAN Integration Fund (JAIF), the meeting in Hanoi is the final national consultative meeting in a one-year project aimed at developing a comprehensive and integrated approach to Mine Risk Education (MRE) that will build on the best practices of ASEAN Member States (AMS) in educating their populations on the dangers of landmines and explosive remnants of war (ERW). As an initiative of the ASEAN Regional Mine Action Center (ARMAC), the meetings were aimed at fostering discussion on the AMS’ current approach to MRE, and to bring those affected by mines and ERW together to share their knowledge and experiences in order to build an integrated approach to MRE that can be used throughout the region.

On 6 August 2019, H.E. Mr. Prum Sophakmonkol, Secretary General of the Cambodian Mine Action and Victim Assistance Authority (CMAA), remarked that the meeting “presents a good opportunity for Cambodia to further strengthen its national Mine Risk Education programme and to document its best practices so that other ASEAN Member States can learn from Cambodia’s experience.”

On 13 August 2019, the meeting in Myanmar was opened by Mr. U Win Naing Tun, Director General of the Department of Rehabilitation, Ministry of Social Welfare, Relief and Resettlement, who remarked at the meeting that “nine out of Myanmar’s 15 States/Regions are contaminated with landmines, Explosive Remnant of War. The Mine Risk Working Group (MRWG) was established over seven years ago as an inter-ministerial and inter-agency coordination platform under the co-leadership of the Ministry of Social Welfare, Relief and Resettlement and UNICEF to ensure mine action interventions are aligned with international standards and lessons learned in Myanmar. The MRWG is now working closely with international forums like ARMAC to better respond to the needs of the affected population. We are glad that experiences from Myanmar will contribute to the integrated approach to Mine Risk Education in ASEAN.”

Following the meeting in Myanmar on 16 August 2019, a National Consultative Meeting was also organised in Bangkok, Thailand with support from the Ministry of Foreign Affairs, Thailand. During the opening remarks, Dr. Suriya Chindawongse, Director-General of the Department of ASEAN Affairs, Ministry of Foreign Affairs, Thailand, mentioned that the project’s implementation is an important step for ASEAN to raise awareness towards the dangers of mines/ERW and the efforts to address them.

H.E. Mr. Thongphane Savanphet, Deputy-Minister of Foreign Affairs, Lao PDR, opened the National Consultative Meeting on 22 August 2019, in Vientiane, Lao PDR. Lao has made progress with regards to MRE, for example Lao has integrated unexploded ordinance awareness activities into the primary schools’ curriculum in contaminated provinces to reduce the risk of further casualties.

In regard to the importance of the meetings, Mr Ly Panharith, Executive Director of ARMAC, mentioned “ARMAC appreciated the input from the mine risk education stakeholders in all mine/ERW affected ASEAN Member States (i.e. Cambodia, Lao PDR, Myanmar, Thailand and Viet Nam) who have been handling mine risk education with various innovative approaches. Their experience and knowledge are of critical importance to develop the integrated approach to mine risk education.”

Looking towards the future, the next steps for the MRE project will be to hold a side event during the Fourth Review Conference on a Mine-Free World on 25-29 November 2019 in Oslo, Norway, so as to establish a platform for ASEAN countries to form a collaborative community of MRE experts and stakeholders. Ultimately, it is hoped that through these consultative meetings, research and other activities undertaken through the project, that the number of victims of mines/ERW can be minimised and in so doing the socio-economic impact of mines is reduced and sustainable development outcomes are improved.