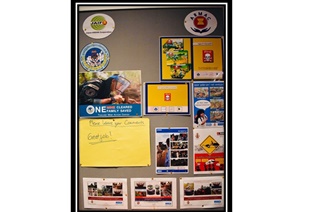 Integrated Approaches to Mine Risk Education for Affected Communities in ASEAN Member States:
The Fourth Review Conference of the Anti-Personnel Mine Ban Convention

The ASEAN Regional Mine Action Center (ARMAC) recently hosted a side event on “Integrated Approaches to Mine Risk Education (MRE) for Affected Communities in ASEAN Member States” during the Fourth Review Conference of the Anti-Personnel Mine Ban Convention, held on 25-29 November 2019 in Oslo, Norway. The conference was attended by more than 600 mine action stakeholders from across the globe, and ARMAC took the opportunity to host a side event as part of a one-year project supported by the Japan-ASEAN Integration Fund (JAIF) to develop comprehensive and integrated approaches to MRE.

During the Review Conference, Ms. Asako Omi, Parliamentary Vice-Minister for Foreign Affairs, Ministry of Foreign Affairs of Japan, extended commitment of Government of Japan to support mine/explosive remnants of war (ERW) affected communities and announced that, “the Government of Japan has allocate[ed] more than USD 800 million since 1998 to support mine action, including mine clearance, MRE, victim assistance and socio-economic integration activities. MRE remains one of our priorities of support, and the Government of Japan calls for an acceleration of efforts including through enhancing innovation and effectiveness.”

ARMAC’s side event gathered more than fifty MRE stakeholders from a diversity of countries and expert agencies to participate in a briefing of the preliminary results from ARMAC’s study on Integrated Approaches to MRE in ASEAN Member States through research and national consultative meetings in Cambodia, Lao PDR, Myanmar, Thailand and Viet Nam.

Representing ARMAC, Mr. Hal Judge, ARMAC MRE expert, presented the preliminary results of ARMAC’s research and consultation, including: the scope and complexity of MRE/ERW impacts, the results from consultations with over 150 stakeholders in the five countries, risk analysis, and the many advantages of integrating MRE through reinforcing activities and programs in the ASEAN region.

Other panelists reiterated the importance of sharing MRE best practices with, Mr. Mohammad Shafiq Yosufi, Director of the Directorate of Mine Action Coordination, Afghanistan National Disaster Management Agency, emphasizing the need for both qualitative and quantitative evaluations of MRE and the exchange of research results. Further, both Mr. Yosufi and Ms. Martha Isabel Hurtado Granada, Coordinator, Grupo de Acción Integral contra Minas Antipersonal, Colombia, also conveyed that MRE should be targeted to the most vulnerable communities, and may be adapted to specific groups at-risk.

Presenting a global perspective Mr. Matthieu Laruelle, Explosive Ordnance Risk Education Advisor, Geneva International Centre for Humanitarian Demining (GICHD), commended ARMAC for its preliminary research, and highlighted the shift in terminology of ‘Mine Risk Education’ to ‘Explosive Ordnance Risk Education’ to better describe the scope of devices the mine action community is addressing. His colleague from GICHD, Mr. Rory Logan, in his capacity as Secretary of the IMAS Review Board, also updated the participants on the current review of the International Mine Action Standards (IMAS 12.10).

Concluding the side event, Mr. Ly Panharith, Executive Director of ARMAC and Chair of the side event, expressed his dismay concerning the new trend of increased causalities from explosive ordnance (particularly in the Middle East) since 2016, but noted that “risk education is gaining momentum globally and is likely to feature prominently in the Oslo Action Plan going forward. For ARMAC, risk education will remain a high priority in our work and we will build ARMAC’s regional and international knowledge base and connections.”