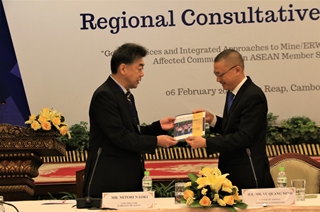 6 February 2020, Siem Reap, Cambodia – Clearance of deadly landmines and other remnants of wars is extremely important for people who live in contaminated regions of the ASEAN Member States (AMS). The harsh reality is that it will take considerable time and work to de-fuse all the residual explosive devices. Meanwhile, alongside the painstaking clearance process, it is vital to protect and educate people, especially curious children, of the dangers of going into hazardous areas or triggering deadly old weapons.

To tackle these important issues, the ASEAN Regional Mine Action Center (ARMAC) took the initiative to convene a major consultative meeting on 6 February 2020 on the issue of “Good Practices and Integrated Approaches to Mine/Explosive Remnants of War (ERW) Risk Education for Affected Communities in AMS.”

The Regional Consultative Meeting was the culmination of a ground-breaking one-year research and consultation project by ARMAC, with the generous financial support of the Japan-ASEAN Integration Fund (JAIF), to analyse and document the AMS’ diversity of mine/ERW risk education (MRE) approaches in educating their populations on the dangers of landmines and ERW, as well as the efforts made to avoid these risks.

Gathering representatives from the ASEAN countries, the Regional Consultative Meeting was an ideal opportunity to formally present ARMAC’s Study highlighting the good practices, innovations and successes the AMS have achieved in integrating MRE into all mine action efforts as well as wider sectors such as development, education, sports, legislation, technology, media and others.

The mine/ERW affected AMS—namely Cambodia, the Lao PDR, Myanmar, Thailand and Viet Nam—have been centrally involved in the development of ARMAC’s Study entitled “Integrated Approaches to Mine/ERW Risk Education”. The meeting was also an opportunity to gather perspectives from all AMS and expert mine action organisations (including UNICEF, the Geneva International Centre for Humanitarian Demining, Mines Advisory Group, the HALO Trust, Swiss Foundation for Mine Action, Humanity and Inclusion, and Norwegian Peoples Aid). Looking forward, the meeting laid solid plans to further build cooperation within ASEAN and with international agencies to progress and enhance the MRE agenda.

During the opening, H.E. Mr. Vu Quang Minh, the Chair of ARMAC’s Steering Committee and Ambassador of Viet Nam to Cambodia, expressed his thanks to the Government of Japan for their continuing support of the project, and to the representatives from the AMS who provided their expertise and time. He further noted that at the recent ASEAN Foreign Ministers’ Retreat held in early January 2020 in Nha Trang, Viet Nam, the Foreign Ministers expressed support for ARMAC with Deputy Prime Minister and Minister of Foreign Affairs and International Cooperation of the Kingdom of Cambodia, H.E. Mr. Prak Sokhonn highlighting that he “is very encouraged by the positive progress in terms of institutional strengthening of ARMAC.” Concluding the opening H.E. Mr. Vu Quang Minh, urged the participants to continue their good efforts in working to enhance the ASEAN capacity to effectively address the problems of landmines and ERW” and looked forward to a future of peace and prosperity.

Representing the Government of Japan and the Japan-ASEAN Integration Fund, Mr. Mitori Naoki, Councilor, Consular Office of Japan in Siem Reap, noted Japan’s strong commitment to ASEAN mine action and highlighted that Japan has consistently partnered with the AMS in the mine/ERW sector through financial contributions, provision of equipment and the dispatching of experts. He further offered is commendations to “all ASEAN Member States’ efforts to promote peace building and to enhance cooperation to share best practices in the region.”

Speaking at the meeting, ARMAC Executive Director, Mr. Ly Panharith, commented that “through the publication of the Study, ARMAC hopes to encourage further efforts in connecting MRE to relevant sectors, including integrating MRE into school curriculums, mobilising volunteer networks, harnessing new technology such as smart phone aps, and other creative approaches to behaviour change.”

Consistent with the agenda of the Regional Meeting, the new ARMAC Magazine featuring stories of integrated mine/ERW risk education from across ASEAN and international developments, was launched. The magazine is now available for download from ARMAC’s website and can be found here https://aseanmineaction.org//resources/magazine.

Concluding the Regional Consultative Meeting, H.E. Mr. Prum Sophakmongkol, Secretary-General of the Cambodian Mine Action and Victim Assistance Authority, added that this meeting will greatly assist ARMAC’s efforts to develop an integrated approach to MRE, including implementing recommendations from the ARMAC MRE Study where relevant and feasible.